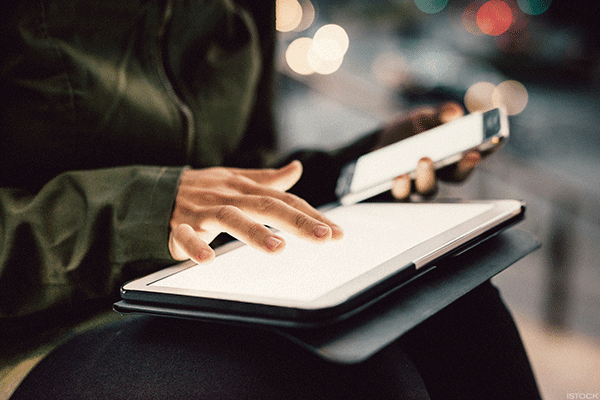 Yes, the FAANG stocks do have higher than average P/E ratios, around 35 times earnings, but that’s only because these are better-than-average companies, Cramer said. The outlier is Amazon, trading around 120 times earnings. But Amazon has faster growth, a bigger total addressable market and has become an indispensable part of our COVID-19 lifestyle.

What makes the FAANG stocks unique is they are proprietary. So much so, they often appear before Congressional antitrust committees. To call them ridiculously expensive, however, is just nonsense. Even Apple, which fell 5.3% by the close Thursday, has tremendous opportunities ahead of it with the coming 5G iPhones and an ever-growing service revenue stream.

The FAANG stocks are growing into their enormous valuations every day, Cramer concluded, and that’s why they should be bought.

In his first “Executive Decision” segment, Cramer spoke with Joshua Bixby, CEO of Fastly  (FSLY) – Get Report, the content delivery network that’s seen its shares nearly cut in half in recent weeks as revenues from its largest client, TikTok, declined.

Bixby said that Fastly saw a lot of good things in the quarter, including their second highest number of new enterprise customers and a strong retention rate for existing customers. He said while COVID-19 has moved everyone online in record time, Fastly is already looking towards a post-COVID world where there will be a new way of working, living and buying with the Internet being front and center.

Following that trend, Bixby explained that Fastly is moving aggressively into edge computing to make transactions faster and cybersecurity, to make those transactions more secure than ever. Fastly services builders, he said, and those builders are already hard at work building the next generation of services that all of us will be using in the next few years.

Cramer said Fastly is difficult to value in the current environment, but there’s no doubt the company is creating a lot of value with its network.

For his second “Executive Decision” segment, Cramer also spoke with Josh Silverman, CEO of Etsy  (ETSY) – Get Report, the small business marketplace that just posted a 13-cents-a-share earnings beat. Shares of Etsy dipped 5.1% by the close.

Silverman explained that Etsy will always be disciplined with their investments, but right now, they need to invest in marketing to sustain their momentum. Now is the time to burn Etsy’s brand into the minds of customers, he said.

Etsy has the potential to be so much bigger, Silverman continued. Etsy doesn’t sell the same thing that 10 other vendors sell, leaving them only to compete on price and shipping times. Etsy is made up of over three million artisans who will make and customize an item just for you. In order for Etsy to succeed, they only need to be top of mind.

Silverman added that Etsy is growing at 2.5 times the rate of overall e-commerce, as more and more people are discovering the joys of connecting with an individual person and supporting a small business instead of a big-box retailer.

For his final “Executive Decision” segment, Cramer checked in Rob Locascio, founder and CEO of LivePerson  (LPSN) – Get Report, the conversational commerce company with shares up 54% for the year.

Locascio said that conversational commerce isn’t just for call centers and banks anymore, now retailers and other industries are also seeing the benefits of chatbots and artificial intelligence.

LivePerson has unveiled a number of new services, from a “BurritoBot” at Chipotle Mexican Grill  (CMG) – Get Report which allows you to build a burrito to pick up at the restaurant, to new shopping systems that use QR codes next to products to let you ask questions without having to physically speak to a person.

Locascio said that the travel and hospitality industries have been under a lot of pressure during the pandemic, but they’re retooling to make traveling a lot better. He said customers are demanding a better experience and LivePerson is working with the airlines and others to provide it. Imagine being able to get alerts and change your travel plans without having to wait on hold for an agent.

What to buy After the Election

In his “No Huddle Offense” segment, Cramer said investors are frantically trying to price in a Democratic landslide in next week’s election. They fear if the Democrats take it all, socialized medicine will be right around the corner.

But Cramer reminded viewers that Joe Biden doesn’t support a single-payer healthcare system. Neither does House Speaker Nancy Pelosi or many other ranking Democrats in Congress. In no universe does a single-payer system get passed, he assured viewers. That means on Thursday, when the selling subsides, it will be time to buy the likes of Merck  (MRK) – Get Report, Eli Lilly  (LLY) – Get Report, UnitedHealth Group  (UNH) – Get Report and DexCom  (DXCM) – Get Report… assuming of course, the election is not contested.

Here’s what Jim Cramer had to say about some of the stocks that callers offered up during the Mad Money Lightning Round Thursday:

Workhorse Group  (WKHS) – Get Report: “This is not a workhorse, this is a show horse. I’d rather be in Plug Power  (PLUG) – Get Report.”

Voya Financial  (VOYA) – Get Report: “I think it’s good. This is the best house in a bad neighborhood, though.”

New York Community Bancorp  (NYCB) – Get Report: “That dividend is too risky. We need to get COVID-19 under control.”

Callaway Golf  (ELY) – Get Report: “I like this story. This stock has been hit but it’s getting cheaper. Let’s pick some up.”

Simon Property Group  (SPG) – Get Report: “If you’re going to own one of these, this one and Federal Realty Investment Trust FRT are the way to go, but we need to get COVID under control.”

At the time of publication, Cramer’s Action Alerts PLUS had a position in FB, AAPL, AMZN, GOOGL.